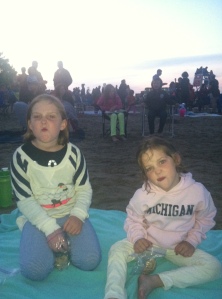 I didn’t let my kids hold sparklers on the 4th.  But I did let eat them eat grapes…uncut ones. Popcorn too, they regularly eat those crunchy little choking hazards with very little supervision.  There are other things I let them do that other parents scoff at.

The list goes on.  There are so many things I did and do that other parents and non-parents think are terrible.  There are also lots of things that other parents let their kids do that mine do not get to enjoy.  There are those hotter-than-the-sun-flame-popsicles affectionately referred to as sparklers, for one.  I’ve also convinced them that they are allergic to soda and that Disney World is not real–it’s only something other kids talk about when they want to make their friends jealous.   But guess what? They’re my kids, and my husband and I know what we’re doing.

Still, that doesn’t stop the parenting police.  It didn’t stop the woman one non-flame-retardant blanket over on the beach from trying to convince me IN FRONT OF MY KIDS that the sparklers are fine, I’m being over-protective and I should just let them hold them.  It doesn’t stop the sleep training specialists, EBF evangelists (that’s exclusively breast fed for the uninitiated), the “I may not be a doctor, but I’ve read some internet articles about vaccines” peeps or the uppity “babies don’t belong in bars” folks from shouting “You are doing this wrong!” on otherwise-friendly social media platforms and in grocery stores, parks and local watering holes.

So let’s make a deal, all of us parents and non-parents alike.  Unless we’re talking about a kid alone in a hot car or some other immediately life-threatening behavior, let’s keep the unsolicited personal parenting advice to a minimum.  I don’t mind a Facebook post, every now and then, that attempts to debunk (or perpetuate) some myth about nutrition, the causes of autism or the safety of household cleaning products.  For the most part, that’s a well-intentioned attempt at a generic public service announcement–one we can all take or leave, without feeling like we’ve been slapped in the face while sitting in a quiet corner of a bar, nursing a single, delicious midday beer as our baby sleeps soundly in her carrier nearby.  But the personal messages directed at people who are not your friends and/or have not asked for your opinion, the other mom in the park who just can’t help but tell me that the slide is too high for my 2 year old, the lady pushing fire into the until-now-unmarred-by-flame hands of my 6 and 4 year olds…those can stop.

I know how to parent my kids.  At least I think I do.  And we all know that confidence is half the parenting battle, so please don’t undermine mine and I promise, from this day forward, not to undermine yours.  Really.  Your kids can breastfeed until their 5th birthday before moving to an all orange soda diet, as far as I’m concerned.  I won’t say a word (to your face).  I promise.  This parenting thing is hard enough without comments from the peanut-free gallery.

2 thoughts on “I Won’t Say a Thing About Your Parenting. I Promise.”