By bedtime tonight all was right in his world. He told me he loved me and wished my patellas to feel better soon.  He chose one of his sisters to read his bedtime story, snuggled up with a dragon, a jaguar, and a pillow resembling his favorite food group: pizza, and he pronounced that the “next day is going to be hilarious.”

Time in his 4 year old brain exists pretty much solely on 3 planes. Last day, today, and next day. Past, present, future.

It’s beautiful and simple. He moves swiftly past the past and present, and focuses largely on next day which is great. Great because I am the best parent ever in next day.

Next day is where all of my best parenting intentions live.

Sometimes I live up to those intentions, and some days I don’t.

Last day he ran away from home for the first time. Planting himself under an old pine tree across our driveway, he declared that plot of half grass, half pine needle land his new home, and said that he would survive there own his own. He’d had enough of me and his demanding, tattling sisters. He had no use for my rules. Ones like “don’t run over your sister on your bike” and “bicycles are not weapons” and “don’t ride your bike with your finger in your nose.”

Eventually though, he had use for dinner and hugs, and he came home.

My best parenting intentions were fulfilled in this instance. I didn’t yell [this time] and freak out about his defiance–I let him run, let him figure it out on his own, and let him come home to a hug that said he’s always got a place in my arms no matter what.

Today though, I screwed up. Today was the day that his preschool class read the books they “wrote” to an audience of parents. That audience did not include his parents. We didn’t know it was happening today or forgot. The why doesn’t matter so much in last day or today. We simply weren’t there.

Tonight at dinner he told me that he “melted because [we] weren’t there.” I held his melty face in my hands and told him we made arrangements to be there tomorrow. We’d see him read his book tomorrow.

But “melting” was an insufficient description for him. He went on.

Mama, you know how da seats in da minivan are squishering seats? How you pull da button and da seat pushed down? Folded down? Dat’s how I was feeling in my inside brain. Folded down.

I’m going to fix this next day.

I’ll do my best. And I’ll know that if it isn’t completely fixed, I still have the next day to try again. 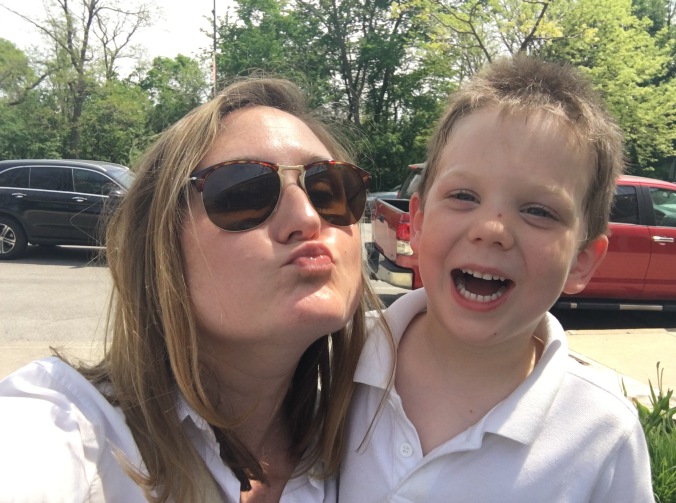 Us, in a shiny happy moment last day.

When my oldest daughter feeds her siblings or dolls, she extends the spoon toward the intended recipient and then opens her own mouth. It’s a reflex. She doesn’t even know that it’s happening. She models the expected behavior to the person/object being fed, the necessary first step to eat.  It’s a sweet, unconscious reflection of her nurturing nature.  It’s also a sweet reflection of her father.

I first noted this particular quirk when he would feed her as a baby.  And then I noticed that his own mother did the same thing when she would feed our children.  Sweet, sweet genetics. Learned behavior, perhaps, too–but if it weren’t for genetics the other two mini persons in our family would be opening their mouths when feeding others.  And they don’t.  I’ve checked.

There are other less, and some more, obvious traits that are traceable through the branches of our little tree.  The shape of my middle daughter’s eyes, they are the exact same shape as my grandfather’s.

The way my son crinkles his nose when his smile passes the threshold between I’m happy and Holy shit, it’s amazing to be alive.  I do the same, as did my mom.

It is incontrovertible evidence of the power of evolution and science. Evidence that we are each a unique compilation of the As and Gs, Cs and Ts of those who came before us.  Evidence that there are some things we can’t fight.

My middle daughter’s Kindergarten class is headed to the Lincoln Park Zoo for a field trip tomorrow. She must’ve asked me about tomorrow’s weather 20 times tonight. I told her it would probably rain but not to worry, she’d still be going to the zoo.

She can’t wait for the zoo. She loves the zoo. She would spend every day at the zoo if she could. This zoo is her zoo. She knows every inch of it and has memorized the most inane of facts about its animals. Not simply species facts, but actual, individual animal facts. Family histories, favorite foods and preferred places to be scratched.

She can’t wait to demonstrate her expertise. And that desire, it’s genetic. Both her father and I are know-it-alls.

After I assured her that despite the forecast for rain she’d still be heading to the zoo, she shook her head and said, “That’s not the problem. I was really hoping for something I’ve wanted for a super long time.”

“If it’s raining Caruso won’t be swinging outside and I was hoping that it would finally be nice enough weather for Caruso to…you know…do his thing.”

Then she burst out in giggles.

Caruso is a gibbon. A resident of the primate house who likes to swing inside the outdoor portion of his enclosure and piss on unwitting passersby.

It’s hilarious if you like that kind of thing.  And in our family, whether due to nature or nurture, we do.  Maybe we got it from that thirty-thousandth cousin a couple times removed we share with Caruso.

Here is video from Caruso’s birthday party last year. The dude is a legend. 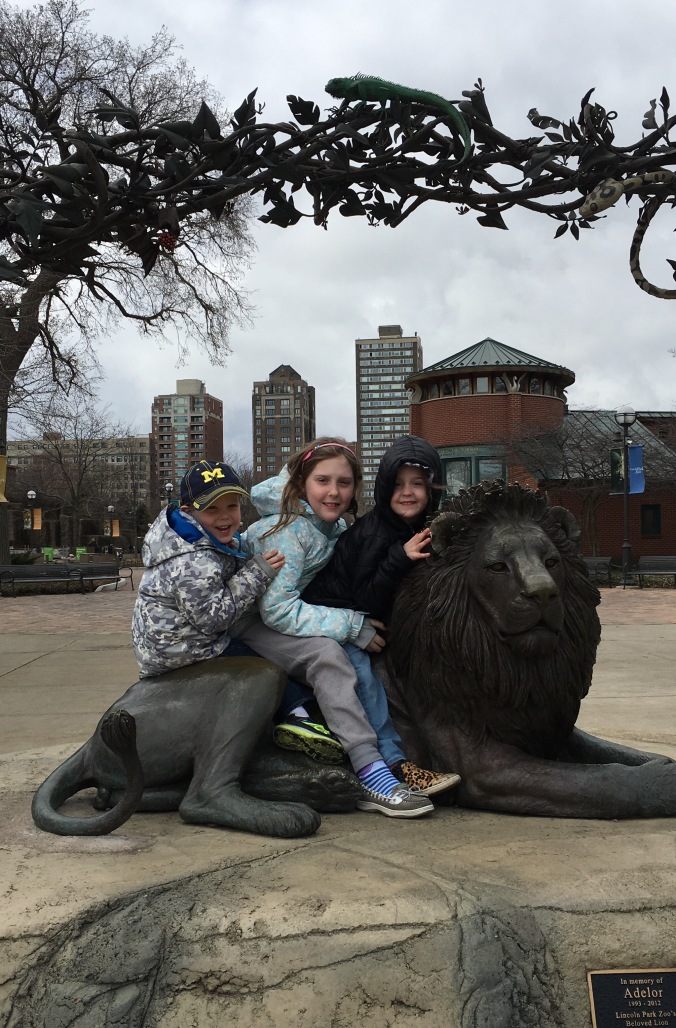 my monkeys at the zoo on day too cold for caruso