I threw my hands up on the whole thing a few years ago.  It was all just too much.  Coming up with a fun idea and then multiple trips to the fabric store, followed by the craft store, followed by hand sewing and glueing of feathers at 2 am.  Only to have those fun ideas and feathery frocks unapologetically rebuffed by a kid who just wanted to be a princess.  Not an original princess…the kind that comes in a plastic bag and is found in aisle 12.  I just couldn’t do it anymore.  Too much work, too much work all around. I had to give up on homemade Halloween.

I feel like I’ve given up on a lot of the ideas I had about the kind of parent I would be.  I’ve only been at this parenting thing for not-quite 7 years, but the list of prime parenting stuff I’ve already given up on feels so long.  I mostly blame my mom for all those ideas, because she was just so darn good at it….she made it look easy.  But it’s not.  Not for her, not for me, not for anyone who’s trying to do it right.

And this whole Halloween costume stuff is especially hard for me.  My mom made some great costumes for my sister and I, largely with stuff from around the house.  There was one year when I was a pig’s head on a platter, complete with an apple in my mouth that I’d have to spit out at each door to recite the magical candy-generating incantation. END_OF_DOCUMENT_TOKEN_TO_BE_REPLACED

The package arrived while I was at work and I saw it by the door as soon as I walked in.  Three pairs of small-to-large baby blue rain boots stood guard around the cardboard box.

I knew what it was and knew that I’d wait until after everyone was asleep before I opened it.  After the last request for another bedtime song, drink of water, and cheeseburger (the last was not granted), I poured myself a glass of wine and sat on the living room floor with the box in front of me.  The dog sat a few feet away with a sad look on her face. Like she knew what was in the box and that I was about to cry, or maybe her super-dog nose detected the molecules of her long lost friend.  Her friend, my mom. END_OF_DOCUMENT_TOKEN_TO_BE_REPLACED

I’m failing at this.  Totally failing.

The supposed-to-be-Oyster-gray grout between my kitchen floor tiles is as brown as the mud tracks our dog left on the living room floor last week that have yet to be removed.  The toilet paper in the hall bath permanently sits in a pile below the dispenser because 100% of the time 66% of my kids are pretending to be cats, and they like to paw at the roll until it unravels in a heap.  They also tend to forget to use that paper as it was intended thus the permanence of the pile, along with the constant need to buy new underwear.

My oldest daughter had picture day at school today and I had to braid her hair to hide the grime because she hasn’t had a bath since Sunday (it’s Wednesday).  I also put her in tights that were so small the crotch is sitting roughly between her knees, but luckily her too-big skirt is hiding the MC Hammer effect.

I thought we were making progress on potty training with the two year old but he told me last night that he loves diapers “more dan lions” (which is a lot).  Because positive reinforcement isn’t working–he doesn’t care what we think of him and is unmotivated by promises of M&Ms because he has a network of old ladies in the neighborhood that supply him with sweets on the regular–I told him that I would have to take away his coveted blankie if he didn’t start sitting on the potty. He responded, “I sit.  I no pee.” I had no comeback.  He left the room, prowling like a cat, with his blankie between his teeth. END_OF_DOCUMENT_TOKEN_TO_BE_REPLACED

I was hours away from the Junior Prom.  The dress was laid out on the bed with both pairs of new black pantyhose. (One could snag when putting them on, so mom had purchased a back-up.)  I decided that with my black dress, adorned with black plastic jewels along the neckline, and black hose, that red would be the perfect color for my nails.  I went to a local salon for the arduous process of fake nail adhesion, sculpting and painting that was so popular in the early 90’s.  The nail technician worked for hours to glue and shape those nails, and for what felt like hours she sanded away the surface of those newly applied fake nails along with layers of my own skin.

I sat in that chair and let the woman run the nail file over my fingers again and again.  I winced and said “ow.” And she would move more gingerly for a few seconds, then start grinding away again.  By the time she was done, I had ten shiny, long red nails and ten bloody fingertips to match.  She used nail polish remover to stem the bleeding, all the while never showing any sign that what was going on was the slightest bit unusual.  I paid (and tipped her!) for her work, and went home.

My mother was furious.  She grabbed my hands and asked what happened.  I shrugged and said I needed to get ready.  I only had three more hours to get dressed—barely enough time to curl my hair and put makeup on!  She was fuming.  She called the salon to complain but that was not enough.  We were going back. END_OF_DOCUMENT_TOKEN_TO_BE_REPLACED

Sometimes I’m in the shower and I imagine myself below a waterfall in Bali.  Not that I’ve ever been to Bali, or even stood blissfully below a waterfall before.  And not that I even get the chance to shower every day.

Sometimes I sit in a coffee shop working and fantasize that I have nothing to do because I am being funded by the Kardashian-Jenner clan.  They have me on retainer to edit the sequel to Kendall and Kylie Jenner’s dystopian fiction debut…a sequel that will never come.

Sometimes I consider what a trip to the Aquarium would be like if I actually had the time to sit and watch the beluga whales swim–to get lost staring into surreal, and decidedly unreal, blue pools.  Or had the time to watch my oldest daughter watch the whales swim without having to run after the other two who are concurrently negotiating for the purchase of a sea star (f/k/a starfish) to take home and trying to find his way in to the penguin exhibit.

Sometimes I read the Sunday Times travel section on a Wednesday night and picture my husband and I on a Danube river cruise.  There are no laptops or children in the picture (either the one in my head, or the one in the Times).

Sometimes when my almost-5-year-old links her arms around my neck, preventing me from leaving her bedside after a late night kiss, it feels like an anchor.  Holding me fast to a lifetime of responsibility, or at a minimum, 10 more minutes of bedside conversation about Halloween costumes and the necessity of having the full Ninja weapon kit rather than a single sword. 10 minutes I don’t have because there are still hours of work to be done after the last kiss.

More often though, her arms–their arms–feel like life preservers.  They circle me, hold me up, and make me feel warm and powerful.  Impervious to rough seas.

I can’t imagine life without them. 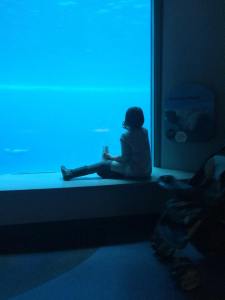 My oldest imagining a life under water.