I’m failing at this.  Totally failing.

The supposed-to-be-Oyster-gray grout between my kitchen floor tiles is as brown as the mud tracks our dog left on the living room floor last week that have yet to be removed.  The toilet paper in the hall bath permanently sits in a pile below the dispenser because 100% of the time 66% of my kids are pretending to be cats, and they like to paw at the roll until it unravels in a heap.  They also tend to forget to use that paper as it was intended thus the permanence of the pile, along with the constant need to buy new underwear.

My oldest daughter had picture day at school today and I had to braid her hair to hide the grime because she hasn’t had a bath since Sunday (it’s Wednesday).  I also put her in tights that were so small the crotch is sitting roughly between her knees, but luckily her too-big skirt is hiding the MC Hammer effect.

I thought we were making progress on potty training with the two year old but he told me last night that he loves diapers “more dan lions” (which is a lot).  Because positive reinforcement isn’t working–he doesn’t care what we think of him and is unmotivated by promises of M&Ms because he has a network of old ladies in the neighborhood that supply him with sweets on the regular–I told him that I would have to take away his coveted blankie if he didn’t start sitting on the potty. He responded, “I sit.  I no pee.” I had no comeback.  He left the room, prowling like a cat, with his blankie between his teeth.

I’m losing.  I’m losing the battle against dirt and mess and diapers.  I’m failing to keep them clean, properly dressed and human.  They want to be cats.  I am allergic to cats.  It’s ironic in an Alanis Morrisette kind of way–so not ironic at all. Just sad, but funny.  Mostly funny and a little bit sad.

This whole post is like an Alanis Morrisette song.  It’s called “Failing” but that’s not what this is.

I’m not failing–at least not when it comes to parenting.  100% of their lives is mostly funny and only a little bit sad.  And that sad bit is important when raising humans.

I’m also not failing because the grading period doesn’t end today.  I’ve got lots of time to make up lost ground and score some extra credit.   Perhaps I’ll come up with some way to use their feline aspirations to accomplish my goals.

Is a litter box an improvement over diapers?

For the sake of the children, I add the following blanket disclaimer to all Goodbye Chicken posts: Any story about poop and any other gross or weird stuff done/said/experienced by any child referenced therein is entirely made up–so future friends, employers, lovers and voters shall not use said story against them.  Of course, any story, or part thereof, about children who are awesome, smart, beautiful and kind or otherwise good is entirely true. 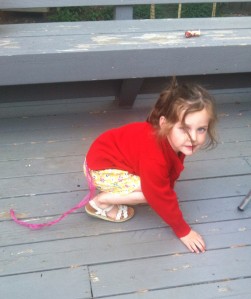 One of my pets.