It tends to comes out of nowhere, when it is the furthest thing from my mind. And then it is there, my frontal lobe sending mom-soaked dopamine compounds throughout my brain. Making me stop for a moment in my tracks, just long enough to pass through a sidewalk sprinkler of memories and emotion. The moisture is barely noticeable, quickly evaporating on a summer day. I can choose to stand still and let the sprinkler hit me again, or walk on. Usually I walk on, the shock of it quickly passing. Sometimes it leaves me chilled, but mostly it feels good. Cool and warm at the same time. Like her.

When my mom’s death was fresh, raw and recent, it felt like I was standing at the shore break after a storm. Unevenly spaced waves were crashing around me, carrying tangles of seaweed and other harsh matter dredged from the ocean bottom. It was hard to breathe. I couldn’t move as the sand gripped tighter and higher around my ankles with each wave. My eyes stung too much to open, making it impossible for me to know when the next wave would break over me.

Now, almost 5 years later, it sucks less. I can breathe. My eyes are open and I am no longer stuck in the sand and waves.

Still sometimes, I am drenched by loss of her.

Today was the second day of summer camp for my 3 year old son.  Yesterday’s drop off was easy, but by pick up time he was sobbing.  This morning he was refusing to enter the classroom.  Asking for a new camp, asking to go home, yelling for “one more minute of talking.”

I was late for work already, my mind racing with thoughts of the thousand things that [still] need to get done.  I was tired from his mid-night calls for trips to the bathroom, sips of water, made-up songs about tall towers, and blanket adjustments.  I wanted to pick him up and drop him in the middle of room and run.  I wanted to scream.

I closed my eyes for a second and was hit by the sprinkler. Confusing and cool, the thoughts rained down. I felt her. I felt her perpetual calmness and infinite patience in all child-related matters. I sat down on the bench outside the classroom and looked at his tear-soaked face. I asked if he wanted to play with me for a while and he nodded. We played with imaginary cars and jet planes. Then we zoomed those cars into the classroom and I asked if he wanted to see where his sister sat when this was her classroom. He nodded, then audibly “ooh”-ed as he sat in the chair that was his sister’s. A minute later he waved me off with a quick goodbye and I left.

I have the ability to call upon her, or to have my subconscious call upon her. To splash myself with the memory of her, and let those thoughts work their sometimes sad but, now, mostly wonderful magic. To remind me to stop rushing, to breathe. To let my kid find his way in his time–just like she did for all of hers.  And to abuse oceanic and neuropsychological metaphors–just as she would have done.  Love and miss you, Mommy. 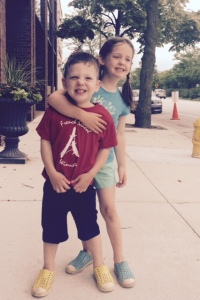 All smiles on the first day. Not so much on the second.

One thought on “Soggy metaphors for loss and love on the second day of summer camp.”