I texted the dog walker today to ask if he could take our pup home with him for a weekend over Spring break. He responded that my 8 year old daughter had already confirmed the arrangements…a month ago.

She is amazing. So on top of her world, and ours. So concerned about the order of things and the wellbeing of all those things and people. So believing in her own ability to make a difference and set things right.

Last night she asked that I make copies of a flyer she’s drafted. She wants people to know what they can do to protect giant (and red) pandas. She believes that people only need the right information to make the right choice.

Mama, if they know what to do then they will do it.

If only it was that simple.

I knew a month ago that I needed to find a home for the dog for the weekend. But it took me until now, the very last minute, to act.

I’m worried about her apparent belief that she needs to take care of things like the dog’s vacation accommodations. I’m worried that a part of her already understands that adults–including her father and me–don’t always take care of things, at least not with the urgency that she believes is needed. I’m worried about the possibility that we adults could elect a President who shits all over the values she holds. I’m worried that she’ll distribute her flyers only to learn that most people will not care about the pandas.

On the other hand, her trust that people will eventually do the right thing when provided the right information is evidence that all hope, all faith in the decency of people, is not lost.

And my eventual efforts to find a weekend home for the dog are a good sign too. I can tell her that I talked with the dog walker today and thank her for being so on top of it. I will assure her that we are on top of it all too and that she doesn’t need to worry. I will give her the copies I made of her flyer and she’ll have them to distribute tomorrow. And I will dish out some ice cream and we’ll dance to Miley Cyrus’s joyous ode to America, Party in the USA, because that’s the best way I know to ensure that the day ends on a high note.

I won’t be a chisel to the edifice of her faith in mankind…and her parents. At least not today. 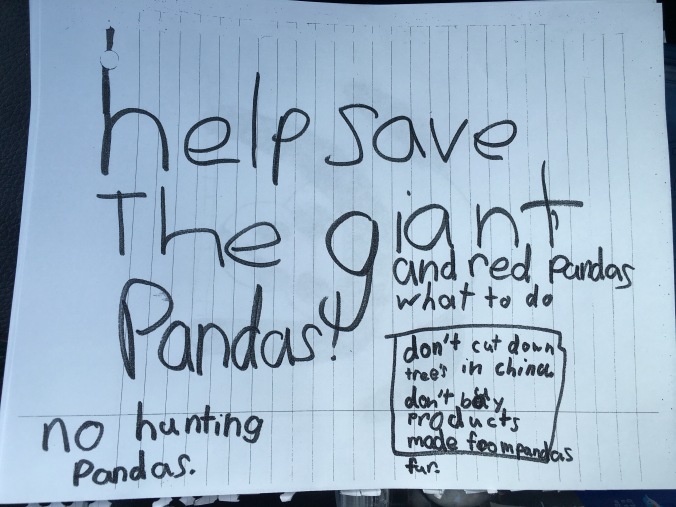