The kitten roamed the forest lonely, looking for adventures.  She was the only one of her kind on Earth, sent to this strange planet when her parents thought it was no longer safe on her home moon.  She resembled a cheetah, but was mostly pink with green spots.  Her color was not the only thing that made her different.  Her ears.  They were really special.

To the other animals in the forest, her ears looked like feathers.  Strange on a cat, to see feathers–but they were no ordinary feathers.  They were extra sensitive.  Attuned to sound, but also to danger.  When the kitten was threatened they moved forward on her head and faced the danger head on.

The feathers shot lasers at anyone or thing that threatened the kitten.  She used them sparingly, but when she did…look out.

Once lasered, the threat was neutralized.  So weak that any predator could only crawl away and each move would create a loud noise that alerted anyone in its path that it was there.  There was a cure, but it was difficult to obtain.

A lasered person or animal must find the special flower that only grows on the dark side of the forest, and only blooms at night.  The poor lasered soul has to wait by the flower until the morning and smell it, just as its petals close.  And it needs to do this for three mornings in a row.  Smell, wait.  Smell, wait.  Smell. Cured.

If the flower can not be found (first, it’s hard to see in the dark forest and second, it’s disguised as an Elmer’s glue bottle) the lasered predator could take its chances among the tricky trees.  They sound easy enough, but they are very tricky.  They are covered in bananas that bite.  (But don’t worry, bananas have no teeth so they can only bruise you.)  If you make it through the tricky biting banana trees, you can be cured.  But be careful, the kitten will be waiting on the other side.  If you threaten her again, the lasers will shoot on full blast.  If that happens, there is no cure. 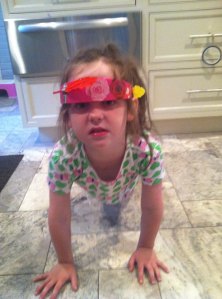